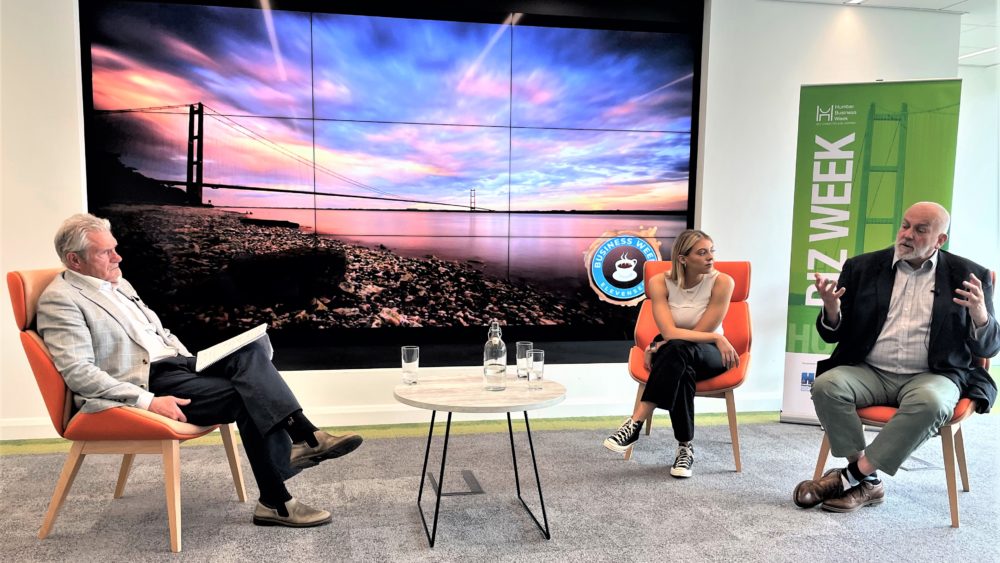 Humber Business Week interviews featuring key figures from politics and culture have been made available online for those who want a second helping or who missed the live event.

The team behind the Elevenses sessions at the University of Hull’s Aura Innovation Centre brought in Hull-based video production specialists Storyboard Media to capture the conversations which were two of the highlights of the Biz Week programme.

The first interview conducted by Paul Sewell – Chair of Sewell Group and a co-founder of Business Week – finds the writer, communicator and strategist Alastair Campbell attacking the government and challenging Keir Starmer and the Labour party to raise their game.

In front of an audience which included former Deputy Prime Minister Lord Prescott and former Home Secretary Alan Johnson, Mr Campbell says: “I do feel very, very strongly that if I was here for a reason it was to help Labour get the Tories out of power, and I still feel that even though the Labour Party took it upon themselves to kick me out over complaining about their Brexit policy.”

He also sets aside his anti-monarchy beliefs to praise the Queen as an entrepreneurial genius: “Strategy, leadership, team-ship, they have got it and they are ruthless as well. I’m not sure there’s any point in being a republican any more while she’s around!”

In the second interview iconic playwright John Godber and his actor daughter Martha talk to Paul about the journey from writing a play which proved a lifeline for Hull Truck Theatre to launching a foundation to help young people from Hull and East Yorkshire pursue careers in the arts.

“We continually need to turn people on to the potential of the arts. In Germany the unions subsidise the arts so there’s no us and them and the more we break down the us and them the more everybody benefits.”

Mr Sewell said: “Alastair also spoke with authority about the broadest range of subjects of anybody I’ve had a natter with. He’s not likely to be the most popular guy on the planet, and he does have that reputation, but I found him really engaging and with a mind like a steel trap.

“My conclusion is that Alastair has so much to give. He shows conviction beyond a professional interest. As the strategy and comms guy he’s professional at what he does and worth listening to on a variety of topics. Some people have issues with him but I would say put those to one side and have a listen, because he has some really good stuff to say.

“With the Godbers the thread which emerged was how fortunate we are that he decided to come here and stay here. Bringing the theatre to working class people and saving the theatre by putting on plays with two or three actors are two massive innovations for the industry.

“And then there’s Martha, a twentysomething already making a big impact as an actor and conscious of the need to send the elevator back down for everybody else.

“There’s no substitute for being in the room and enjoying a live event where you pick up the nuances and asides, especially with the likes of Lord Prescott and Alan Johnson in the audience, but the films will enable people to recap, catch up and look ahead to our programme for 2023.”